Health authorities are scrambling to contact passengers on five flights after a Virgin Australia crew member tested positive to Covid – as it’s revealed more than 50 new venues in Sydney have been exposed to the virus.

The five flights on Friday and Saturday took passengers either to or from Brisbane, Melbourne, Sydney and the Gold Coast.

‘The crew member is now in isolation, and Virgin Australia is rapidly contacting all team members who are close contacts,’ the airline said in a statement on Saturday night.

‘Virgin Australia is requiring those crew members to cease flying, get tested and isolate. All passengers on flights the crew member operated will be contacted by health authorities and advised on the correct protocol.’

The worrying news comes as Greater Sydney and surrounding areas were plunged into a 14-day lockdown due to the Covid outbreak of the highly-infectious Indian Delta strain that originated in the city’s east and is threatening to spiral out of control.

A further 52 venues were added to the exposure list on Saturday night as the city comes to grips with its most dangerous coronavirus period to date, with 82 cases already.

Eerie photos showed the Harbour City reduced to a ghost town just hours after the two-week lockdown was introduced. 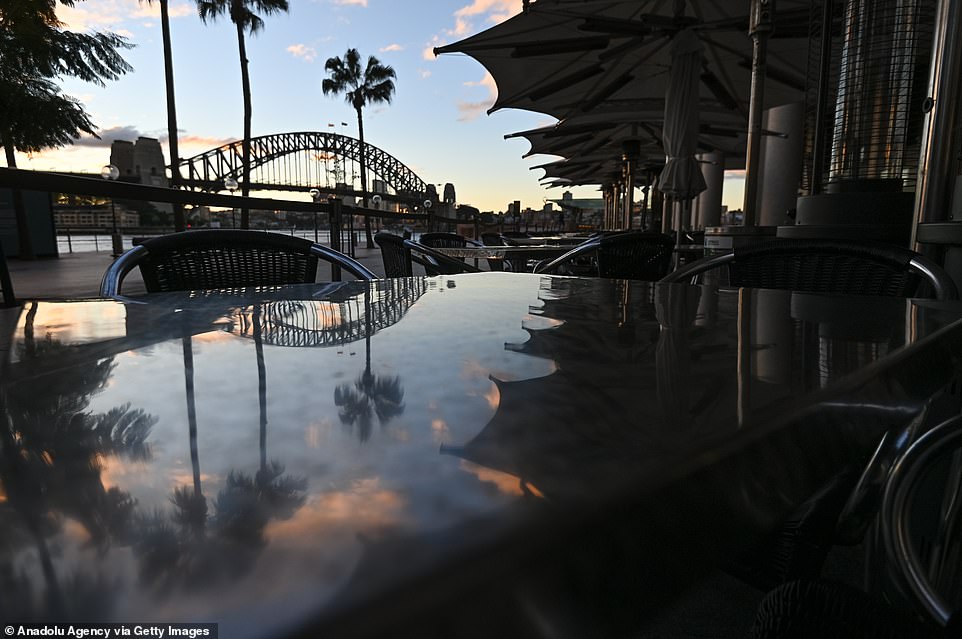 Sydney Harbour, usually lined with Sydneysiders and tourists on a Saturday night visiting the many bars and restaurants that line its shores, saw a turnout of only a few out exercising 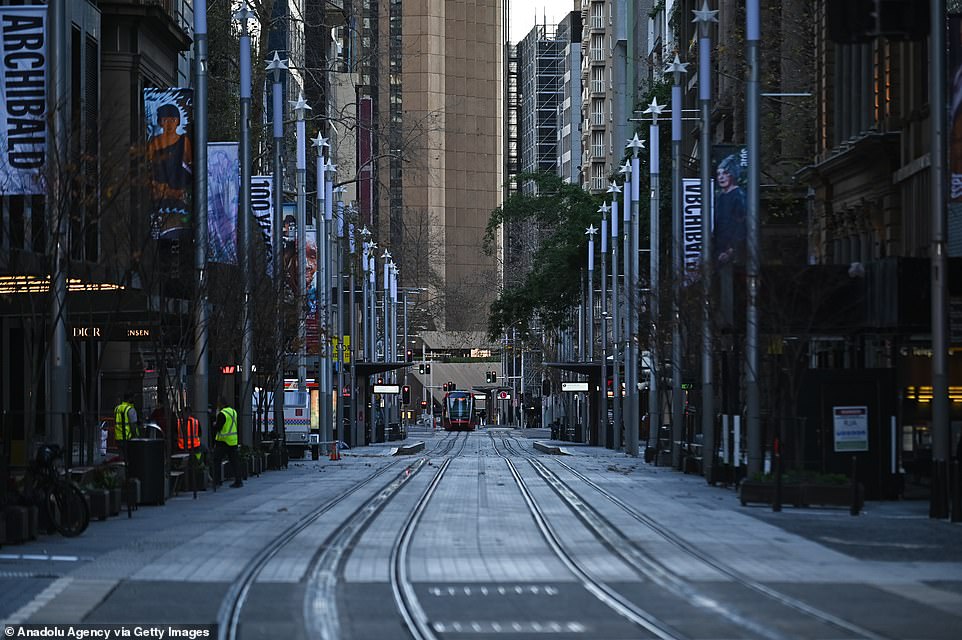 The city’s new light rail system was running at extremely limited capacity, with public transport virtually non-existent throughout the city 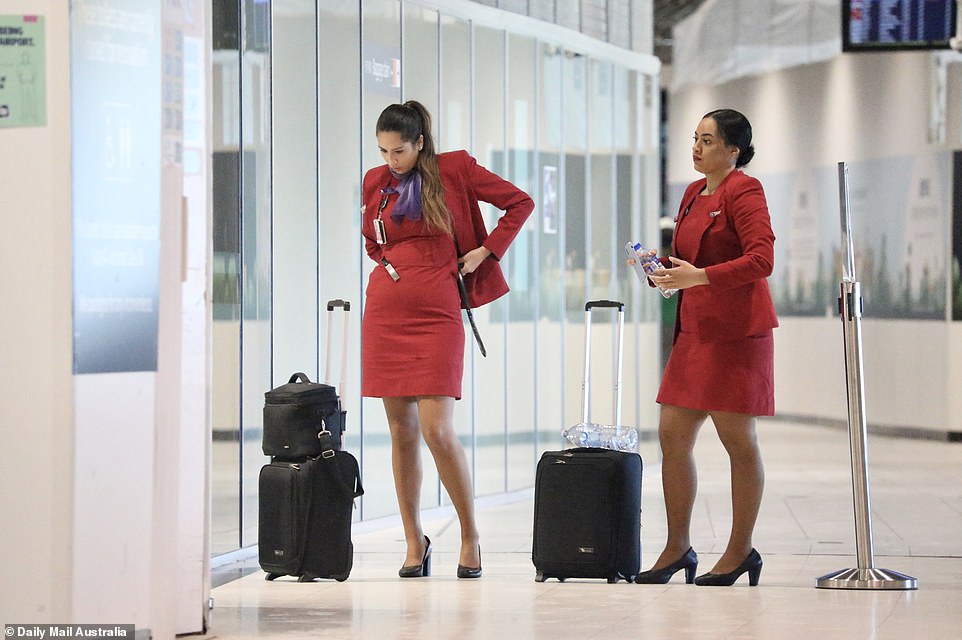 The Virgin flight attendant who was infected with the virus while working on five flights through Sydney, Melbourne, Brisbane and the Gold Coast has sent health authorities scrambling as they attempt to contact trace anyone onboard.

‘Virgin Australia can confirm that a Sydney-based cabin crew member has tested positive to COVID-19 after undertaking a rapid result test this evening. State and Federal health authorities have been notified,’ the airline said in a statement.

Virgin say the woman was from a ‘known cluster in Sydney’ and was ‘not aware’ they were a close contact until their shift ended on Saturday.

‘The crew member also had an overnight layover in Melbourne on 25 June 2021, staying at the Holiday Inn Express Southbank. While in Melbourne, the crew member remained in hotel isolation under prescribed COVID protocols for overnighting crew members from New South Wales.’ 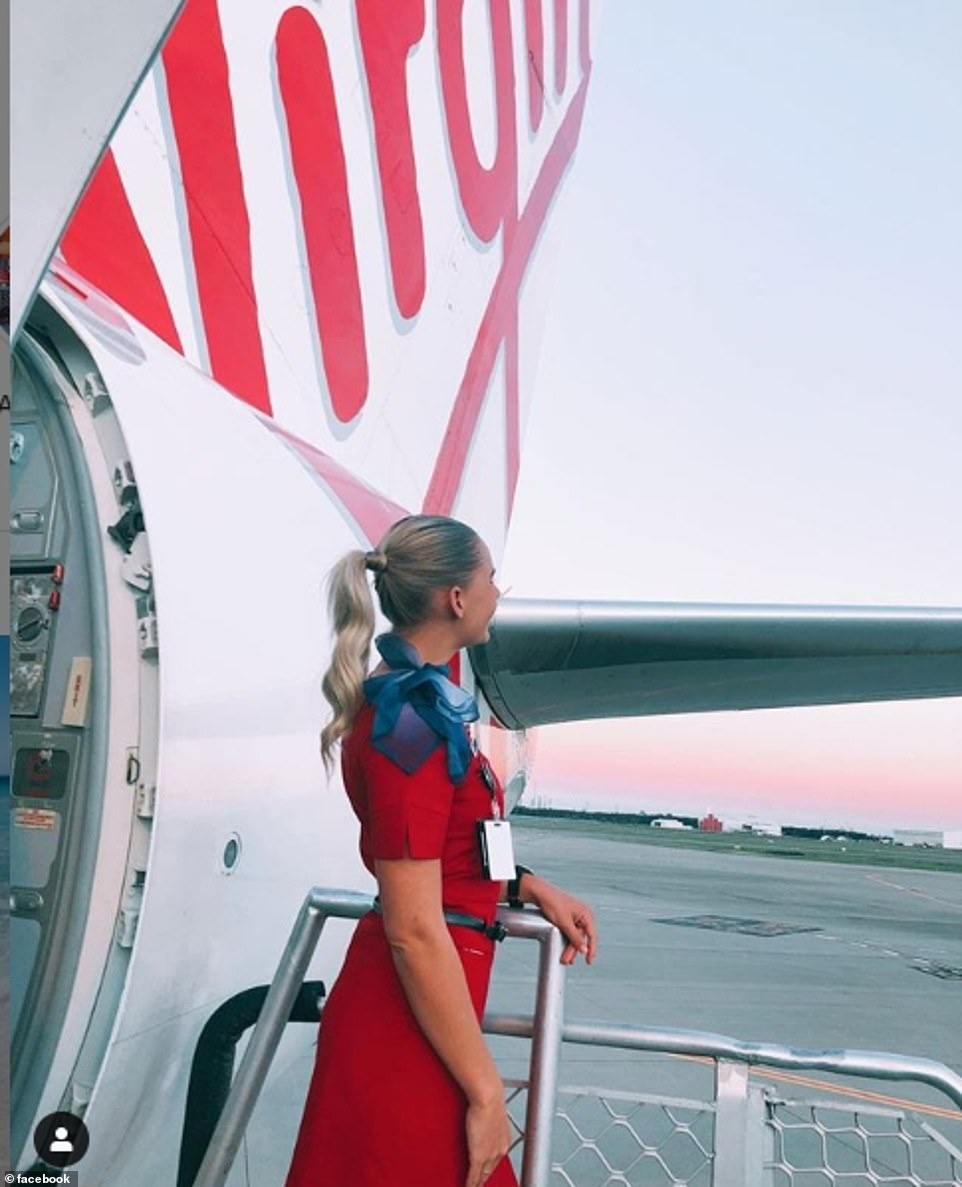 A Virgin flight attendant (not pictured) also tested positive for the virus on Saturday night after potentially being infectious on five flights through Sydney, Brisbane and Melbourne 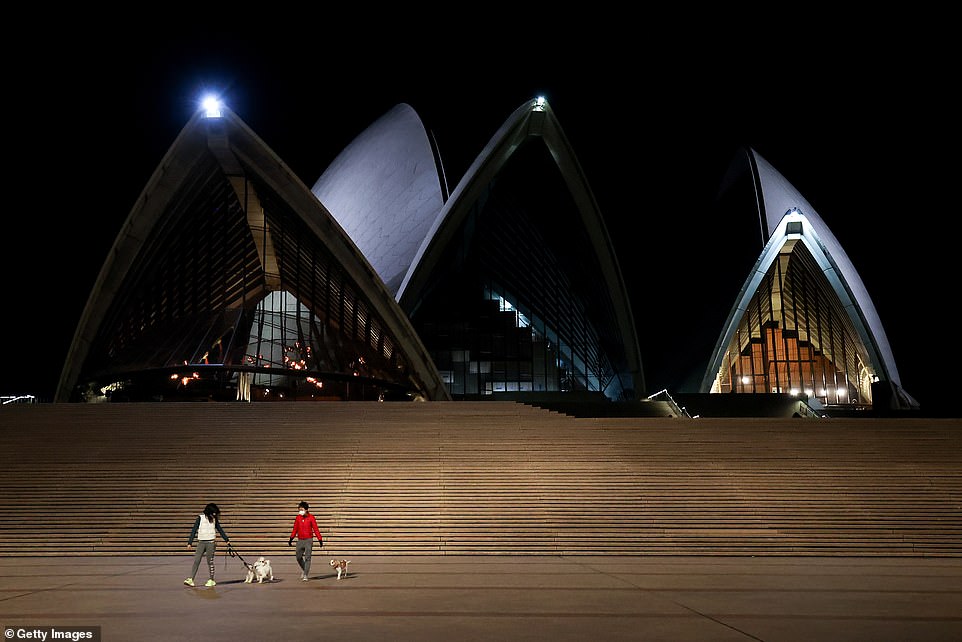 Circular Quay, usually bustling with people from all around Sydney and New South Wales, was eerily quiet with the famous steps leading up to the Opera House completely empty

Town Hall train station is among 26 new Covid hotspots identified across Sydney in a late night alert from NSW Health, including upmarket restaurants and take-aways, just hours after more than 6 million people went into two-week lockdown.

Eight of the locations – including the upmarket Bistro Moncur in Woollahra, a favourite among the eastern suburbs social set and wealthy locals – are considered close contact sites.

The gym at Coogee Diggers RSL is also on the latest exposure list, with a near-two hour window for close contacts.

Anyone there at the times listed must get tested and go into isolation for two weeks regardless of the result. .

The alert for Great Ocean Foods in Marrickville has now been extended to take in all day every day from Monday June 21 until Friday June 25.

The Crossroads Hotel in Casula has again been named a high-risk exposure site and anyone who attended the pub on Wednesday June 23 from 7pm to 10:30pm must immediately be tested and self-isolate for 14 days.

In July last year a Melbourne freight worker visited the pub for a party, which resulted in at least 34 cases. He claimed he didn’t know he was sick.

Stay-at-home orders will apply to all of Greater Sydney including the Blue Mountains, Central Coast, and Wollongong areas from 6pm on Saturday and will be in place until midnight on Friday July 9.

Locals are only allowed to leave their houses for four reasons, which include for school or work if unable to do so from home, medical reasons including to get the vaccine and to give care, for essential shopping and to exercise outside in groups of no more than ten.

‘There is no curfew. You can leave your home at any stage to purchase any essential goods that you need to and that is a given. Be thoughtful and considerate about fellow citizens and no need to panic buy,’ Ms Berejiklian said on Saturday during a media briefing.

‘I said that this the scariest time since the pandemic started and that’s proven to be the case.’

Regional NSW will follow restrictions that were previously placed on Sydney which include having only five visitors at a house, wearing masks indoors, hospitality venues reduced to one person per square metre and outdoor venues reduced to 50 per cent capacity.

‘So for those parts of New South Wales that aren’t in lockdown, restrictions still apply because we want to make sure that if there have been any occasions where people unknowingly have taken the virus outside into the regions, that we don’t have any spread in those regions,’ Ms Berejiklian said.

Weddings will be able to go ahead over the weekend but will be banned from Monday.

Funerals can continue with a maximum of 100 guests and masks indoors while community sport will also be shut down over the next fortnight.

Shops will remain open and financial assistance will be available.

Anyone who attended any of the following venues at the listed times is a casual contact and must immediately get tested and self-isolate until a negative result is received.

Anyone who attended the following venues at the times listed must monitor for symptoms and immediately get tested and self-isolate if they develop: 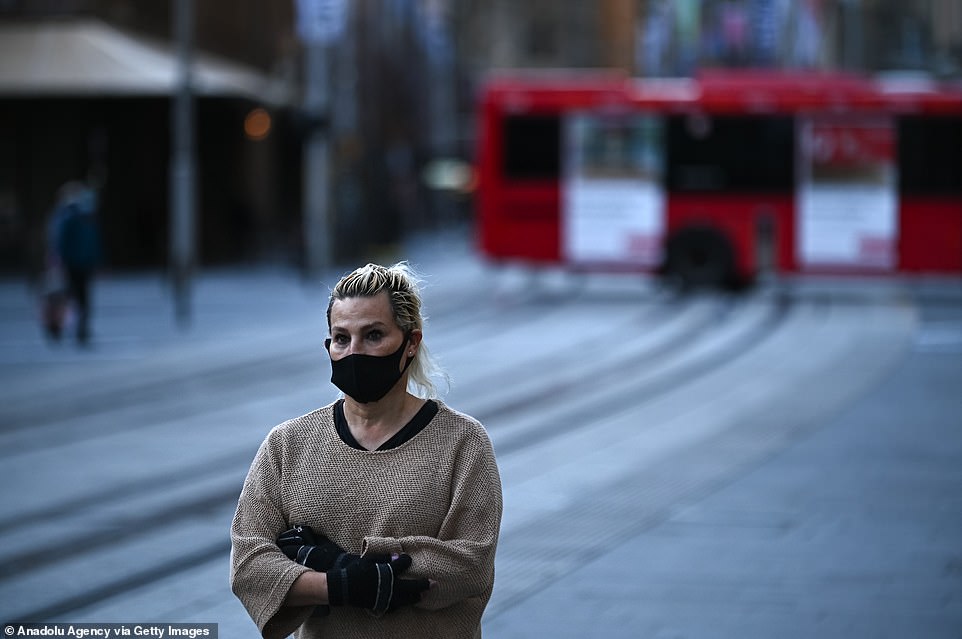 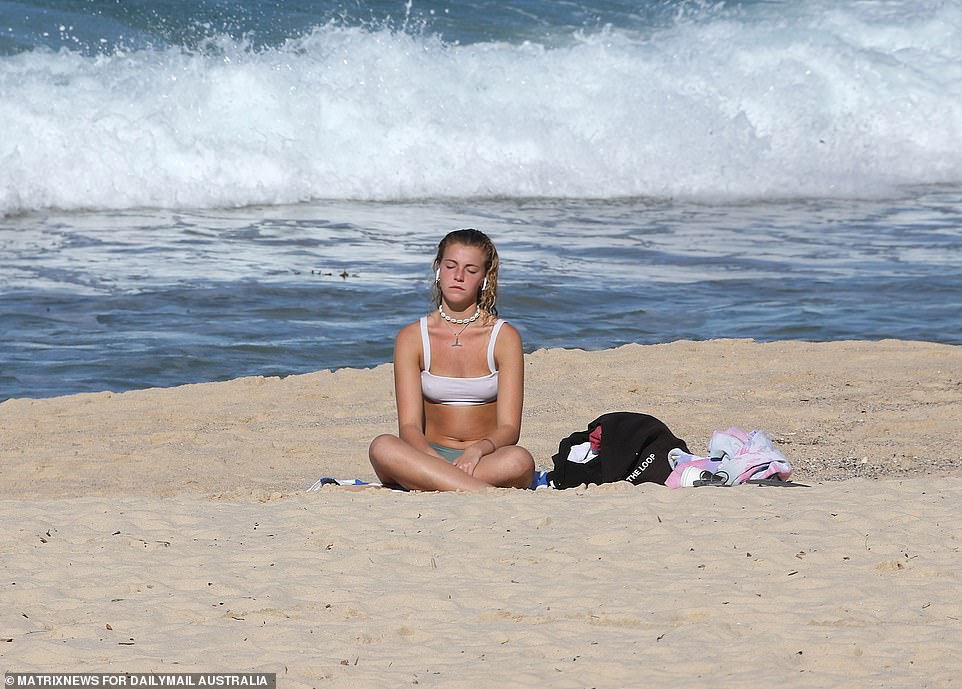 Sydney residents were undaunted by the new stay-at-home-orders, soaking up the sun on an unusually warm late-June day on Saturday. Pictured: Woman on Coogee Beach on Saturday 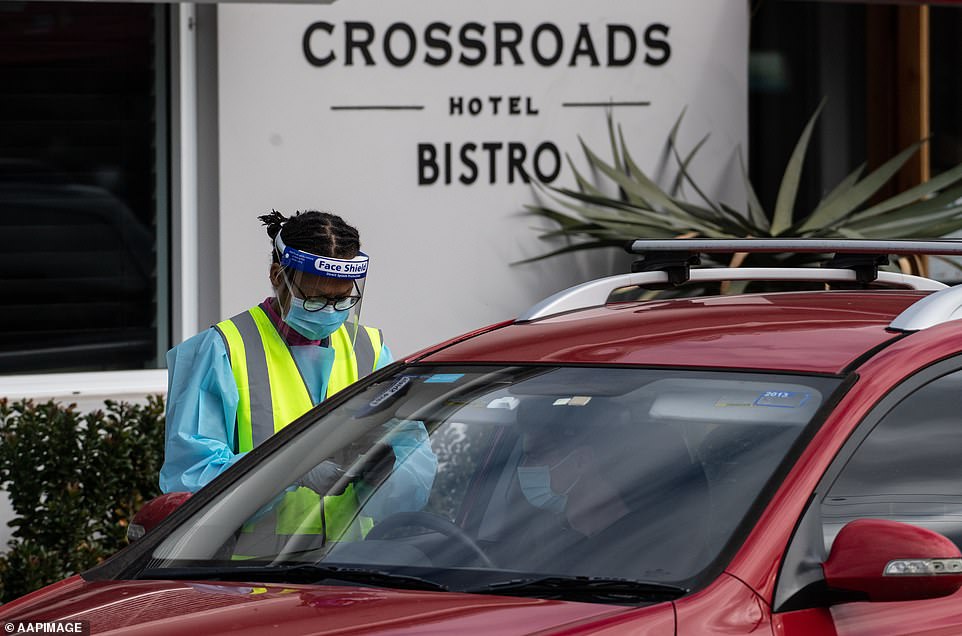 The Crossroads Hotel in Casula has again been named a high-risk exposure site and anyone who attended the pub on Wednesday June 23 from 7pm to 10:30pm must immediately be tested and self-isolate for 14 days 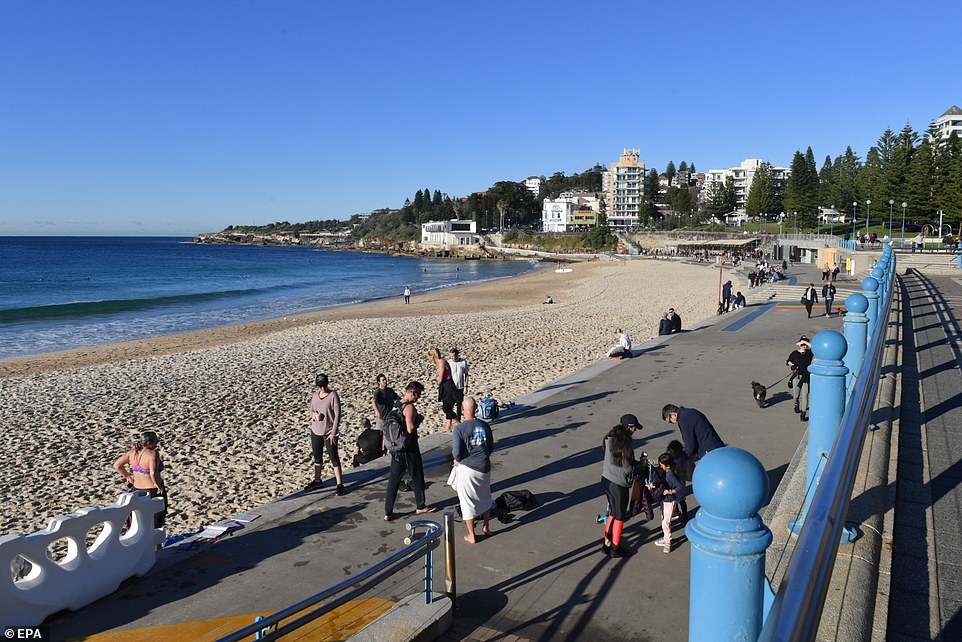 The images cast a stark contrast to the scenes of Friday night, where residents from the four local governments initially put into lockdown attempted to celebrate their final hours.

Images of revellers flocking to bars and restaurants in Bondi, Coogee, Surry Hills, Darlinghurst and the CBD showed Sydneysiders undaunted by the growing coronavirus outbreak in their city.

One man was seen stumbling out of a pub on the beach in Bondi, losing his balance as he friends laughed in the background.

Circular Quay, usually bustling with people from all around Sydney and New South Wales, was eerily quiet with the famous steps leading up to the Opera House completely bare. 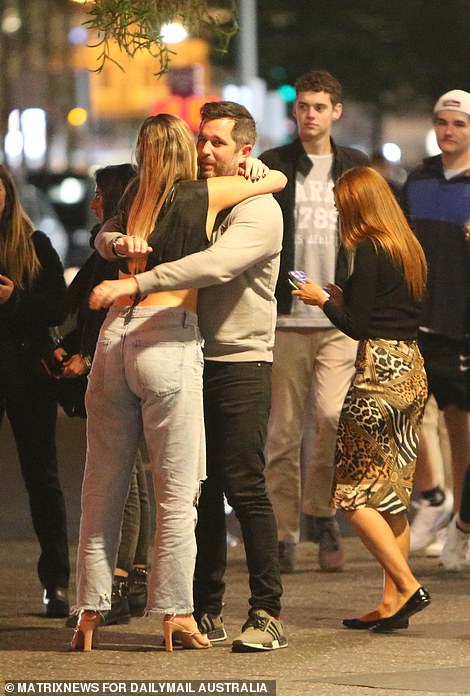 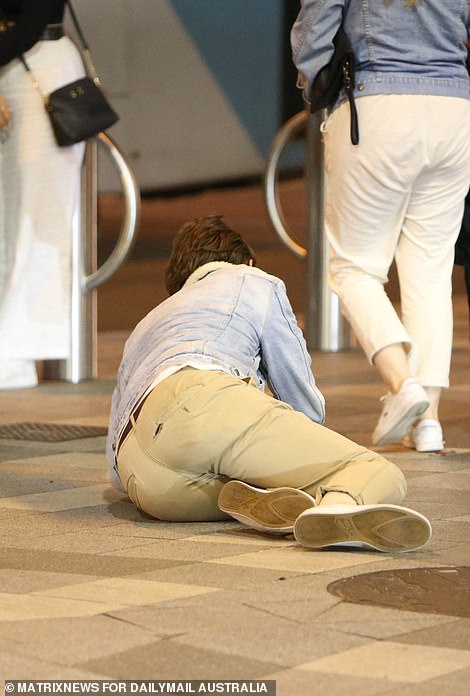 The images cast a stark contrast to the scenes of Friday night, where residents from the four local governments initially put into lockdown attempted to celebrate their final hours 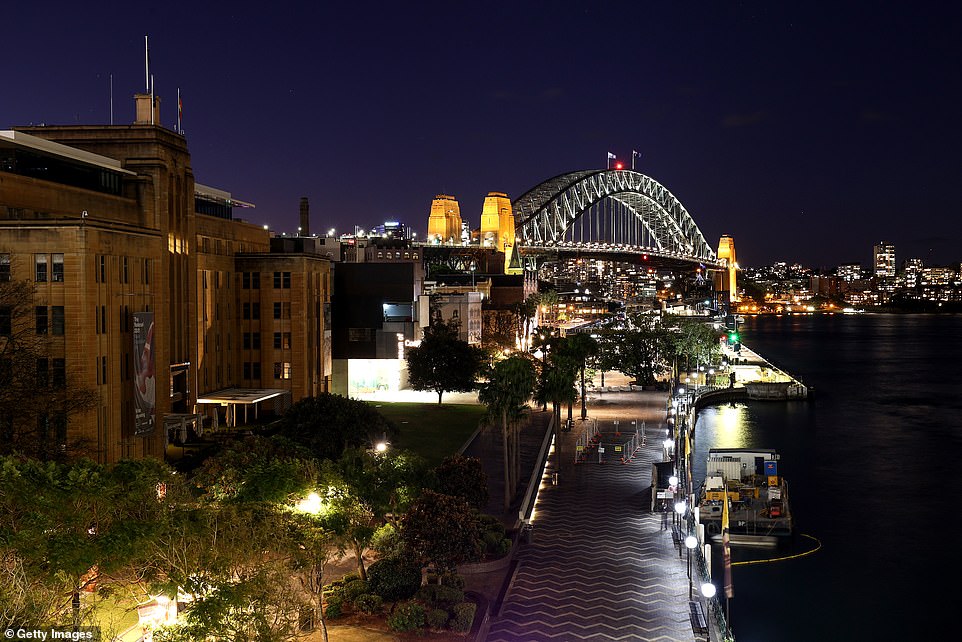 The images cast a stark contrast to the scenes of Friday night, where residents from the four local governments initially put into lockdown attempted to celebrate their final hours

New Zealand is fully closing the trans-Tasman travel bubble with Australia for at least three days following the worsening COVID-19 outbreak in Sydney and other areas of Australia.

It says quarantine free travel from all Australian states and territories will be paused until 11.59pm (NZT) on Tuesday, June 29.

He said New Zealand would consider implementing of a range of measures to make the bubble safer, such as pre-departure testing for all flights from Australia.

‘I acknowledge the frustration and inconvenience that comes with this pause, but given the high level of transmissibility of what appears to be the Delta variant, and the fact that there are now multiple community clusters, it is the right thing to do to keep COVID-19 out of New Zealand,’ Mr Hipkins said in a statement on Saturday night

More than five million people in Sydney and its surrounds have gone into a 14-day lockdown as health authorities try to regain control of a coronavirus outbreak that has ballooned to 80 cases.

NZ officials had already closed the trans-Tasman bubble to NSW until July 7 at the earliest.

Since opening in mid-April, the bubble has been partially closed for more than half the time, but this is the first full closure.

On Friday, NZ Prime Minister Jacinda Ardern postponed a visit to Australia next month due to the worsening COVID environment.

Ms Ardern was to visit a number of states – including NSW – in the first week of July on a trade and tourism effort.

She has not left New Zealand since the onset of COVID-19.