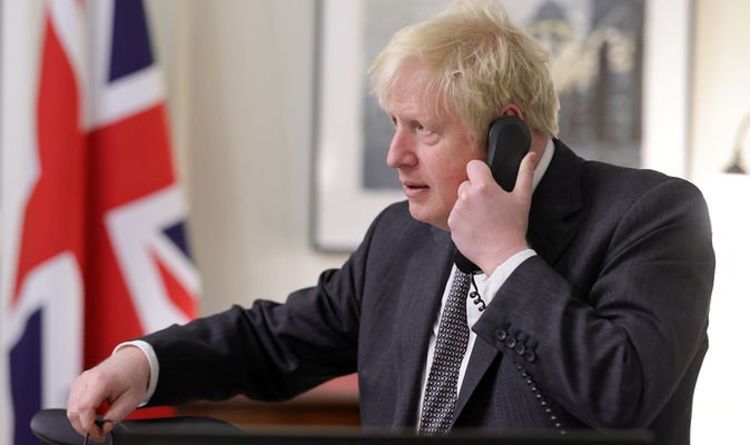 The Prime Minister phoned the European Commission President after Britain unveiled its proposals to vary the Protocol’s implementation. In Parliament yesterday, Lord Frost and Northern Ireland Secretary Brandon Lewis define plans to chop bureaucratic crimson tape on items crossing the Irish Sea and likewise take away the governance of the Protocol by EU establishments and the Court of Justice.

The collection of recommendations put ahead would equate to a full renegotiation of the Northern Ireland Protocol, which was agreed to as a part of the 2019 Brexit withdrawal settlement.

Explaining the UK’s proposals to Ms von der Leyen, Mr Johnson mentioned the Brexit mechanism was “unsustainable” in its present type given the affect it was having on the UK’s inside market.

A Downing Street spokesperson mentioned: “The Prime Minister spoke to the President of the European Commission, Ursula von der Leyen, this morning.

“They mentioned the UK’s Command Paper on the Northern Ireland Protocol printed yesterday.

Yesterday Lord Frost warned the issues attributable to the Protocol had reached the edge required for the UK to set off the authorized mechanism to droop its implementation.

He mentioned Britain didn’t need to use Article 16 however wouldn’t rule it out if a everlasting resolution to the Protocol’s frictions couldn’t be discovered.

“The Prime Minister urged the EU to look at those proposals seriously and work with the UK on them,” the Downing Street spokesperson added.

“There is a huge opportunity to find reasonable, practical solutions to the difficulties facing people and businesses in Northern Ireland, and thereby to put the relationship between the UK and the EU on a better footing.

Following the call Ms von der Leyen mentioned the EU “will not renegotiate” the withdrawal settlement.

She mentioned: “The EU will continue to be creative and flexible within the Protocol framework. But we will not renegotiate.

“We should collectively guarantee stability and predictability in Northern Ireland.”

Morrison has finally embraced ‘informed consent’ for AstraZeneca, what took him so long to take Atagi’s recommendation? | Paul Karp